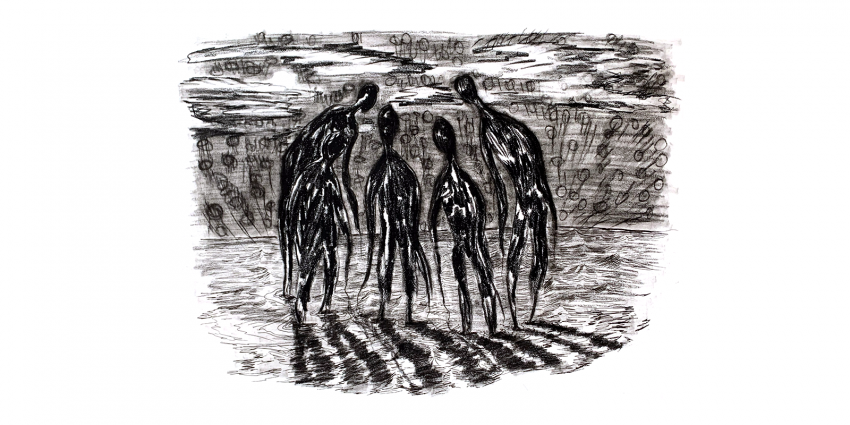 It was sometime after the pork chops—dinner finished, the wine half drunk, tea for me—that Jaine started to talk.

“You know how the ’70s were,” she said, sipping her third glass of Bordeaux. “The idealism of the ’60s was approaching death’s door, but Reagan hadn’t yet slit its throat. We were all looking for something to believe in.”

I nodded along, though I didn’t live through the decade personally. I was just happy to be invited, there among the distinguished faculty of The Thursday Club, myself not even tenured.

“Is this the old void hugger-thing again?” asked Grant. Professor Adlerberg was his proper title, but we were all supposed to be friends here. He was head of the ornithology program.

“You studied esotericism?” I asked. She looked at me with surprise, as if she had forgotten that I was the new hire in that department, or that I was even present.

“Well, not for long. The professor, he was one of those psychocosmic purists. So I dropped the class, and Dave, we called him Dave then, followed me out. I’ll admit I had taken a liking to him. Not because of his looks, mind you. Man was an inch above a dwarf. Bald too. But the way he spoke . . .”

“Oh hush,” Jaine replied, taking a long sip. “It’s important to know why so many of us followed him.”

“Not for his idealism?” Thaniel asked.

“Ideals were hawked on every street corner,” Jaine said. “If a cult was all I wanted, there were plenty more palatable to find, kumbayas and communes, not blanketing seas and endless abyss.”

“But the science was strong,” I said, blowing on my chamomile.

“So they say. Anyway, there were three of us then. All women, all young, all beautiful. It was the shimmer of our souls that he said brought us together, but, well, Dave was a man. He called us . . . ‘The Stalumen of the Timeless Future.’”

“But it didn’t sound so damn patriarchal in his native tongue.” Another sip. A twirl of her midnight-hued hair. I found that I could suddenly imagine Jaine young.

“We had our rites,” Jaine continued. “Meditation, songs, a sort of stretching thing, not quite yoga, not quite brog-le. Some summoning, basic stuff, rarely caused more than a weekend curse. And sure, there was sex; it was the ’70s.”

She finished her glass and reached for the bottle. Grant hesitated, looking towards Thaniel, before pouring.

“What really hooked my interest was this old chest of his. Carved with winding serpents and old gods, or—somethings that he called gods. I wasn’t sure. I suppose I should have been more faithful.” She laughed to herself, like the hum of a glass harp.

“Claimed he got it from some ancient city, or dreamscape, can’t recall. Inside were orbs, bone flutes, and crushed powders we would sometime snort . . .” She paused, letting the fireplace mix shadows upon her face. “The strangest thing was this little glass box. Dave never touched the latch, locked though it was. In it was this intense green light. Not emerald, not lime, vivid, brighter than a fog light. There was something off about the light, something terrifying and inviting. As if all that you desired and dreaded were hidden by its glare, and somehow, the two were one in the same.”

A ding rang from the kitchen.

Later, sitting in the living room, I tried to cool my purple-fruited tart by piling ice cream on top.

Jaine continued: “The light, Dave said, would be the end. The final end.”

“Did you believe it?” Thaniel said, clearly asking, Do you?

Jaine shrugged. “A lot of what he said turned out to be true. Not the eschatology, but other things. You have to understand, when he was talking, no matter the crowd, he was always talking to you. Just you, only you.”

A bird flew by the window, though night had already suffocated the sun. It had gray feathers and a long, hooked beak. I’d have to describe it to Grant later.

“When Dave talked to you . . . if I said it was a religious experience, that would be underplaying it. He understood you, and for a good while, I thought that ‘you’ was ‘me,’ that it was only ‘me,’ that everyone, everything, else was just circumstantial. That this world of gray towers and blank faces was thinner than paper, without weight, that I, me, you, whatever, was the only source of reality, a glimmer burning in the void. Nonsense, I know, but if you can imagine it . . .”

She sighed, pouring herself more wine.

“So when Dave said, ‘Hey, we’re going to destroy the world, going to summon up those who sleep in the depths to bring about an age of shadows,’ well, why not? Beats office work.”

“So why did you finally leave?” I asked.

“Things got complicated,” Jaine explained. “The group went from a club with some vague ideals—and orgies—to a real organization. One of the biggest, even at the time. It wasn’t like we were the only cult around. Still, when Dave started to get serious, started to demand secrecy, started to make the plans for the Great Summoning, I started to question why I was there. Plus, I had almost finished my psychology degree, and when life starts to come together, your youthful dreams seem more and more childish.”

Thaniel nodded, and Grant muttered an “I could drink to that.” Emilié stared off towards the wall.

“Did you leave beforehand?” I asked. Thaniel glared at me. Jaine glanced sideways. I realized that I had stepped over a line. “Sorry,” I mumbled, “I was just curious, if you were there . . .”

“At the Great Summoning?” Jaine asked.

“No point in lying,” Jaine said. “I was there. I held the goblets. I let the ichor flow over me, listened to the land crack, the oceans gurgle. I saw the blackened forms rise from the waves, watched the city sink.”

At this point Emilié fell to the floor. She grasped at the carpet and started moaning. Thaniel tried to help her up, but she wouldn’t budge.

“You heartless bitch!” she screamed into the floor.

Jaine sipped her wine, gaze unwavering. She did not strike me as indifferent, just unwilling to let her mask fall, determined not to humor the drama.

Thaniel tried to pry Emilié up. Failing at that, he stood in front of her, playing with his cufflinks, as if blocking the view would make the woman go away.

“Perhaps we should . . .” Grant started, but he couldn’t quite figure out what exactly they should do, spinning his wrist as Emilié soaked the carpet with her tears.

Finally I stood up, claiming that I had to leave, silently wondering if my idle questions had just drowned my future.

I had difficulty finding my car on those hilly streets. The mid-autumn winds had tossed the leaves about. The neighborhood seemed not itself, old paths hidden in the piles, the trees bald and boney. The wind still dashed about, matching my confused thoughts.

Grant caught me at the top of the bluffs overlooking Thaniel’s house.

“Sorry you had to see all that,” the old professor said, offering me a cigarette. I didn’t smoke, but took it anyways, chewing on the end.

Grant laughed. “Oh, the night was heading that way. It always does, when personal history and politics mix.”

I pulled my coat tight. “I can’t imagine how The Thursday Club sticks together, if that’s a normal night.”

Grant laughed again, softer. “We’ve been doing this for a long time. Do something long enough, you don’t really know how not to do it.”

I chuckled a little and leaned on the guardrail.

“Its good to have some young blood. Too easy to get trapped in the past,” Grant said, glancing over the endless swells of suburbia below. “You can relive things you’d rather leave buried. We’re not our young selves, not anymore, not ever. The past really isn’t real, you know. We become new people over time, connected by memories, but not by the self. The spirit can’t survive adolescence, to say nothing of middle age. The child is left dead, the graduate student buried by the time you reach fifty. But I’m just rambling.”

Grant might have said more, but I found myself unable to listen. Down at the house, the windows, once teatime dim, now burst with a sudden light. It looked like a star rising from some hidden depths of the ocean, though this star shone not in whites nor yellows, but in a great, vibrant green.

Noah Lemelson is an author based in Los Angeles. He received his Bachelor of Arts in biology from the University of Chicago and received his Master of Fine Arts in creative writing from CalArts. His debut dieselpunk fantasy novel, The Sightless City, is set to be released this July from Tiny Fox Press. noahlemelson.com.

Pia Lua is a self-taught artist who learned to paint and draw from observing her creative family and surroundings. Having grown up in Frankfort, she embraces her love for northern Michigan. She studied ecology, evolution, and biodiversity at the University of Michigan. pialu62.wixsite.com/pialu.