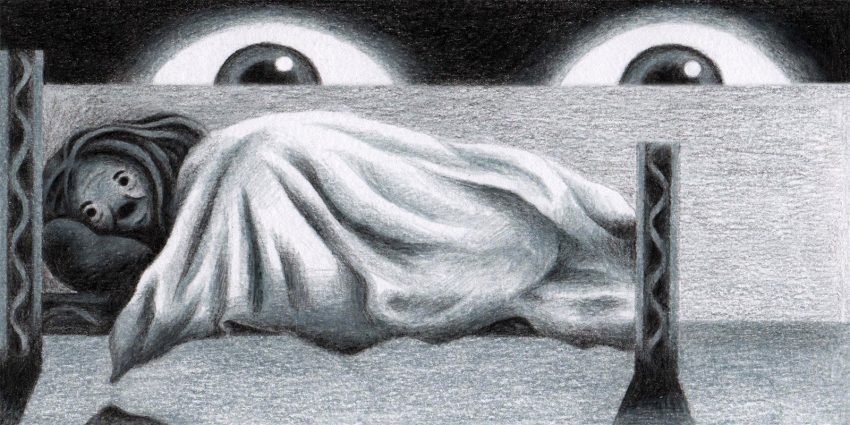 My mother dies before she knew me. When she becomes sick, I move in to her house, and when she dies, I inherit the place. An old, two-story shotgun house. Each room is an agony of her belongings. I camp in the living room closest to the front door. Venturing farther in feels obscene. More often than not I find myself outside. Her house is a shrine and I a stranger. I lived here as a child, but that feels long enough ago to be forgiven. One evening, I find myself in the backyard staring up at the broad backside of the house, at all the dark windows. There is no back door, but there is a cellar door. It’s unlocked.

I wonder what my mother would say about all the things in my life she has never seen, my outfits, who I call family. The things that, now that she’s dead, she never will. Our relationship was like a folded paper: touching on one side and hidden on the obverse.

The basement is stuffy and empty mainly. The dryer and washer. Shelves with hardware and tools, a few boxes of old things, obsolete toys. Among them an old dollhouse. My mother loved that I used to play with dolls. She said it would make me sweet.

I pull it off the shelf and sit down on the concrete floor to study it.

It is a cardboard model: detachable roof and three floors that can be separated. The exterior of the house has held up fairly well.

Removing the roof reveals several rooms, walls vaulting. Some of the rooms house storage, stray furniture, boxes, scraps of carpet. There is a bed toward the front of the house. An old woman sleeps there, bundled under an old quilt: a double carpenter’s star pattern red like radiating wound. The woman is calm, her flesh maintaining a warm hue, mouth agape as if snoring. She doesn’t know a thing about the floors below her.

I cry a little now, daydreaming how painful that must be. And my mother was in her hospital bed just the same way.

I remove the attic. Beneath, the second floor contains bedroom suites, in each room floral wallpaper in white and pastels, neutral carpets. In one, a man sits on the edge of his bed, head slumped forward, as if studying his palms, which he holds above his lap. I look closer. Around his cardboard eyes, rings of mold eat away his flesh and run hungrily down his chin and neck. He is naked except for a pair of white briefs. Brown fuzz lingers around the high-cut leg holes. There is no mold on the bed.

The man is not alone on this floor. Down the hallway from his bedroom, a child runs. They are moving away, clothes whipping back in haste. Their left leg is snapped off at the shin, and their body staggers over the vacancy. Many paces down the hall, a single foot and ankle remain behind. I want to put the two together, but I can’t touch them, the child or the foot. They no longer belong together. There’s sweat in my eye, burning. The man and the child cannot be in the same room either. They just can’t. Hip bones never touch; they just rotate on the same plane. The child runs down the hall toward a staircase. And above the staircase landing, an open window.

I remove the second floor. Living room, dining room, kitchen. There are no people on this floor. I am thankful. The paper furniture here is more ornate: gilded edges of gold foil, tiny latch-hook rugs beneath tables, painted detailing on the handrails on the stairs. Filaments of thread run across the floors, snaking around walls, bunching here and there. In the kitchen sink the threads tangle into a hideous knot. A sewing needle pierces the cabinetry beneath the sink, and the thread runs through its open eye.

Nothing seems familiar about this dollhouse, the little thing I used to play with now so blurry and undefined, a static memory become current. I always thought my mother’s hands smelled like cardboard.

Removing the first floor, I hear weight shifting in the foundation. I yawn. It’s a large, open space with two walled-off side rooms opposite each other. Twigs and dry leaves scatter across the floor. An outside smell, old. One side room is empty. The other is full of dry dirt.

I dig, splashing granules over the walls. Then, first emerges beak, an eye socket, a head, wings, a tail. I can’t exhale. I hold the tiny mummy in my hand, so light and paper-like, but indifferently real. I lay the baby bird in the open room and continue digging. Just below the first is a second, dirt packed in its eye. It could be the same bird, just as fragile, just as small. I put them together, proving two.

In the last bit of dirt, I find the third, this one smaller, eyes closed, tongue dangling from its open mouth. I don’t want to swallow. The three dead lie there touching: birds of a feather.

I grab the remaining dirt in a fistful, ready to be done. In my fist is a person: same shape and posture as the man on the second floor, same white briefs, same markings of mold. But she is a woman. In my hand she falls apart as if tired.

The people living here can never meet. They know each other too well. They know the consequences. Time must be nothing in a cardboard world. A moment is just a sheet of paper in an endless stack. But papers cannot touch out of order without chaos.

I leave the cellar and walk to the front yard. Looking up, I see light glowing in an upstairs window, marking this place inhabited. My face crumples. A home I will make my own. Another place of mine my mother will never know.

Justin Allard graduated from Centre College and currently lives in Louisville, Kentucky. Their work has appeared in Crab Fat Magazine, The Aquifer, and Gertrude Press, among others.

Benji Thomas is an artist and writer based in St Leonards-On-Sea. His artwork draws inspiration from everyday scenes and spaces, which he attempts to reimagine. He works in coloured pencils, watercolour, acrylic, and mixed media. Benji also writes for Hastings Independent Press and pens his own short fiction. Instagram.