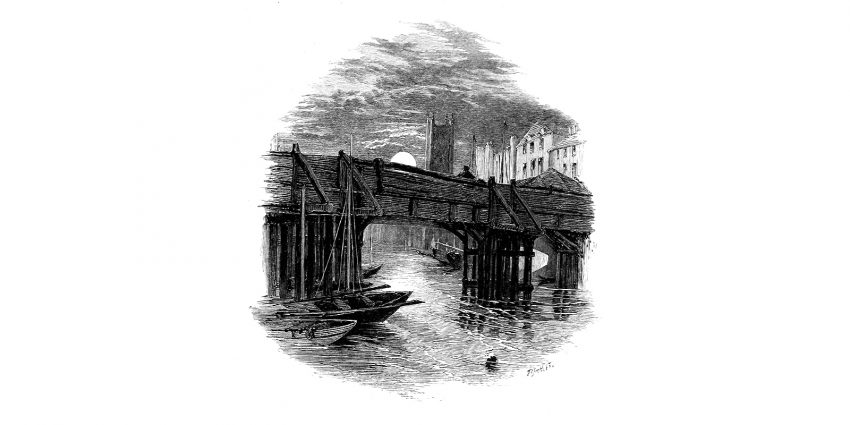 On rare nights in the late fall when the moon is a sliver short of full, the fog rolls in from the sea to fill the hollows and valleys of Whitecliff. And on such nights, the children of the town go fishing.

Min padded down the dark hallway in her socks, avoiding the creaking floorboard under the diamond-patterned rug. She paused by a half-open bedroom door, the nightlight within painting a gold stripe down her face, and then turned away to slip out the back door. Jamming her feet into her sneakers, she turned sideways to fit through the gap in the back fence. Last year she could have wriggled through without touching the sides, but she’d grown since then, in all sorts of ways.

The fog in the narrow street was so thick she could taste it, salt and metal and a dark tang of decay. She couldn’t see the other side of the street and navigated more by memory than sight. On the way up the hill, gray shadows brushed past her wordlessly, all of them heading for the bridge across the railway line.

She paused at the top of the Bridge Street steps. There were men between her and the bridge, huddled in the meager pool of light cast by a street lamp. They paced about, hands tucked in pockets, stamping their feet for warmth. On nights like this they waited for a child who might choose to sell her catch. Some said that the more desperate men didn’t always wait for an offer. Min crossed the street to pass them by, unseen behind a line of parked cars.

The pedestrian bridge spanned two high embankments, the rails beneath drowned in churning fog. Children lined both sides, pale shapes perched on the bridge railing or sitting with legs poked through the slats, heads bent over their lures.

Beneath them the fog lapped at the underbelly of the bridge, thicker than any fog had a right to be. It billowed and swayed, tossing up phantoms. Here—a curving wisp that briefly resembled a slick and gleaming back. There—an opalescent sheen, as if the moonlight reflected off a vast, blind eye.

Every Whitecliff family had its night fishing tradition, and every family swore its lures were the best. Every family except hers, which had come to this town barely a year ago. She’d overheard the children talking about night fishing at school. Only overhead. They didn’t talk to her.

She’d watched Maisie comb the seashore all summer for little treasures. Now in her hands Maisie had smooth green sea glass, golden starfish, and striped shells that echoed the sea when you put them to your ear, the bait all knotted together on a catgut line.

José had a collection of military paraphernalia from his grandfather. Bright polished brass buttons, tarnished medals and bullet casings, all sewn to a bag of moth-eaten khaki.

Gil strung together raven feathers and pale bird skulls. Angie untangled a clot of yellowed lace threaded with glass beads and mirror fragments. Sofia had a pile of thrift-store lockets filled with photos of the dead, chains knotted in a complex web.

They stopped to watch Min take a ball of string out of her pocket. With great care, she tied a salvaged lock of dark brown hair and three threads drawn from a tattered red ribbon. The children raised eyebrows and shrugged, as if to say each to their own. Min might be a newcomer, but once on the bridge no one would ruin a night that might come only once a year. One by one, the children of the town stepped up to the railing and cast their lines into the fog.

Min knotted a barbed hook onto her line and paused. Then, with a convulsive jerk, she dragged the point of the hook over the palm of her hand, opening a jagged red line. Blood dripped onto the bleached planks of the bridge. On winter nights, the townspeople whispered of the times when the people of Whitecliff fished the icy northern waters for larger prey. The sacrifices offered then were more than just drops of blood. She dropped her lure over the side with the rest.

Everyone watched the roiling mist. The red and green Christmas lights that hung on Josh’s line flashed hazily. The children held still, eyes aching, trying to make out some movement below.

Min had grown chilly long before Sofia hauled up her great tangle of knotted chains and necklaces, dumping it all on the bare planks of the bridge. A blue blur writhed in its center. Min saw a hint of flashing tentacles and a spiny ridged back before Sofia deftly tipped her catch into a mason jar. The others dragged their lines up, filling jars with red and blue and lilac. These were common colors, which granted marvelous dreams: flying against an indigo sky, or swimming with tentacled creatures through a gaseous sea. When the children placed the jars by their bedsides, the dreams they had would stay with them always. But when they woke, the jars would be empty except for a dull, gray husk that crumbled to a dry powder at the slightest touch, like a discarded skin.

There were rarer colors. Yellow might bring madness to all who slept nearby. Such a catch was best returned to the fog, but the waiting men would pay well for such a thing. Gold brought life-long luck to the dreamer. Rarest of all, silver brought a beginning or an ending, though none could say which it would be.

One by one the children made catches, or gave up and departed yawning. Min rested her head on her arms. She’d be twelve this winter, and this would be the last fall she could go night fishing. No child older than twelve years had ever made a catch, though there were always those who stubbornly kept it up. She jerked awake and blearily looked around. The bridge was empty now. Under her palm she felt it again: the gentlest of tugs. She hesitated, one hand on the line. Bring it up now and risk frightening away her prey, or wait, and risk it escaping the hook? Biting her lip, she reeled in the line slowly, before pulling her catch over the railing. She felt in her bag for the jar, and scooped up the creature, quickly screwing the lid tight. The gash on her hand left bloody fingerprints on the glass. She ignored the red smudges, holding the jar up to examine her catch. Bright silvery light filled the jar. She glimpsed feathery whiskers and a row of gleaming eyes, before it all blurred into a soft, argent glow. With shaking hands Min wrapped an old towel around the jar and stowed it in her bag.

She stopped on the street at the end of the bridge. The men were still there. A cigarette glowed like a small red eye in the mist, and the dark shapes turned her way. They’d give her good money for this catch, more money than she’d ever seen, enough to pay off all her family’s debts. Another dark shape shifted to peer through the fog, and before she could think about it, Min ran. Down the steps to Dunwich Lane, then across the cemetery behind the old church, the fog making menacing shapes of the tombstones. Up the alley to her house, through the gap in the back fence, which scraped her arm with splinters as she squeezed through, and inside, finally bolting the door behind her. She leaned on the door until her breathing slowed, and then crept down the hallway to the bedroom door.

The room still glowed with the amber nightlight. The smell of disinfectant mingled uneasily with the citrus of the scented candles her mother burned, which failed to disguise the sour tang of vomit. Min stood by the bed, looking down on her sleeping sister. Miri had removed the soft woollen cap their grandmother had made for her, and the bumps and dimples of her bare skull stood in sharp relief in the light. Her chest barely seemed to rise and fall with her slow breathing. Min nudged aside the pill bottles and tissues and placed the jar on the bedside table. The silver coils paused in their endless writhing, and the gleaming eyes turned to study the sleeping girl.

Min withdrew, as quietly as she had come, to await the dawn.

S.A. McKenzie is a writer of offbeat and blackly humorous science fiction and fantasy stories featuring time travelling rabbits, carnivorous unicorns and man-eating subway trains, because someone has to speak up for these misunderstood creatures. Find them online at www.hedgehogcircus.com and on Twitter: @samckenzie2.