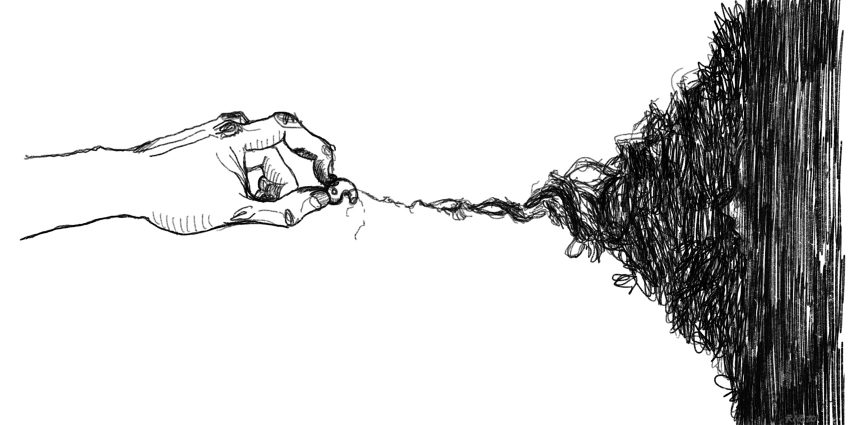 Around ten in the morning, Dr. Sekitei stopped by with a bunch of spring onions and a bottle of beer in his hand. We had become friends through our mutual love of haiku.

“Noises from the Tasakas’ pond keep me awake at night. I haven’t slept a wink for three days.”

“I find it annoying, too,” he said. “They’re draining the pond to turn it into a field.”

“Never mind that. Why did you bring the beer?”

The Tasakas’ duck often swam through the sluice and ate seeds in Sekitei’s field. Thus, he said he would lure it and kill it.

Sekitei’s romance with the Tasakas’ only daughter had reportedly run aground. Her stepmother used to sneak him in and let him see the girl in the garden. But when Sekitei returned from the war, things changed altogether. Rumor had it that her family now kept the girl stashed away somewhere. Maybe Sekitei wanted to drink to forget the whole affair.

“You lure a duck with a loach on a fishing hook,” he said. “You dispose of the duck with a scalpel on the spot. I used to do that in Central China during the war.”

He tucked up the hem of his kimono and went out. Hours passed, but he didn’t come back.

Yesterday the Tasakas’ maid had also paid me a visit.

“Somebody killed a duck and left it in a thicket,” she’d said. “Please help yourself to it if you don’t find it spooky.” She left a large wing.

Someone killed one yesterday. And Sekitei is out trying to kill another today. I would hate to be a duck in the Tasakas’ pond.

Sekitei came back with something in his hand and dropped it on the edge of the veranda. It was a ball of hair.

“It came out of a duck’s stomach. Wait till you see this.”

Sekitei sneered, poked his fingers into the peculiar hairy ball, and took out a small jade earring.

“This belonged to Hisako,” he continued. “So the hair must be hers, too. Her stepmother murdered her and dumped her in the pond. The duck pecked her body, and this is what’s left of Hisako.”

“I’ve got more reason to suspect them,” he said. “About two months ago, her stepmother came over and picked up Polimos pills saying she was tired. She’s obsessed with new pills, so she must know how to use the arsenious acid contained in them.”

I doubted if ducks would eat humans. Besides, if they sank their daughter’s body to the bottom of the pond, they wouldn’t drain the pond. I’d sensed there was something wrong with Sekitei lately, but I hadn’t imagined things were this serious. While I stared at his face, a haiku he had recently composed flashed back to my mind.

The girl lies lifeless
with cold aquatic weeds as
her summer pillow.

Something stirred in me.

“Do the Tasakas have many ducks?” I asked.

“No. They had only one,” he answered. “She never imagined she would get caught because of a duck. How about that? You can’t really outsmart reason, can you?”

As Sekitei practically confessed to his lover’s murder, I, in my mind’s eye, saw the girl’s eerily pale face as she lay lifeless among dark water grass.

Jūran Hisao (1902-1957) was a Japanese author who wrote in multiple genres during the Shōwa period. In 1952, he won the twenty-sixth Naoki Prize for his short story “Suzuki Mondo.” His work has been translated into Chinese, English, and French.

Toshiya Kamei holds an MFA in Literary Translation from the University of Arkansas. His recent translations have appeared in Clarkesworld, The Magazine of Fantasy & Science Fiction, and Samovar.

Sue Choi is an artist and designer based in Denver, Colorado. She has lived in parts of Tennessee, Kentucky, and South Korea. She has been drawing for eighteen years. She enjoys both digital and analog media. Instagram. Flickr.